Deciding on one personal film aesthetic was difficult for me, as I love many films for so many different reasons. An overriding thread through many of the films I love has to do with setting and how the photography and representation of a particular setting as the backdrop for a story resonates with me personally. The setting that particularly stands out for me as a distinct aesthetic feature is New York. Entire fields of study could be dedicated to the rhetorical techne of filming and photography for this city. Known as much for its visual beauty, architectural significance and cultural diversity as it is for its historical relevance, New York City is a study all its own. One could disappear into the thick knap of its many layers and never run out of new and fascinating things to discover about the city that never sleeps.

I’ve selected a number of scenes that represent the New York aesthetic in film visually, culturally, historically and artistically. I will focus on each film represented in my graphic and discuss the fundamental appeal of each within the context of this setting and the integral relevance of this appeal. I will be focusing on exterior aesthetics, settings, locations, color and mood as they relate to the city as a canvas for these film narratives. I could write an entirely separate essay on interiors and set design for films set in New York. I’ve decided to stay with the exterior locations and settings for this relatively short essay.

This 1961 film adaptation of Truman Capote’s 1959 book of the same name has transcended the world of celluloid media to become a part of American pop culture consciousness. Holly Golightly is the archetype of the lost and wild young woman escaping the banal limitations of farm life by running away to New York City. The draw to this city in particular seems so universal that it drives the mythos of this film by pulling at the fascination so many have with the idea of making a similar move.

At the center of Holly’s fascination and ideation of New York’s promise is the legendary Tiffany and Company jewelry store located on the equally legendary 5th Avenue in Manhattan. The sub-narrative representation at the heart of this promise is tied to the rise of American consumerism and prosperity of the 1950s. All scenes of Holly and Paul coming and going from their Lexington Avenue brownstone, including the famous cab hailing scene early in the film, capture the residential essence of New York city. This is to say, this essence is intended to contrast the viability of both Holly and Paul to actually afford the lifestyle in which they find themselves. Which, in itself, exposes the underbelly of the New York runaway promise – that the city is beautiful and dirty, accessible and out-of-reach in turns. And the cost of these cornice-front lives may not be obvious, but will be substantial. As Holly looks into the window of the Tiffany’s storefront, the aesthetic of the polished and guilded, granite-front, 5th Avenue experience which has become a New York city hallmark of American success, is captured. Visitors re-create this image every day as 5th Avenue teems with window shoppers drawn to the city and the symbol of American prosperity it represents.

One cannot have a discussion about New York city film aesthetic without mentioning the king of New York film, Woody Allen. I can attribute much of my fascination with New York to Allen’s films, which have always exemplified to me the most pure and unadorned visual representation of this incredible city.

This famous silhouette of the Queensboro Bridge from the film Manhattan, a film many have called Allen’s “love letter to New York,” is one of the most aesthetically beautiful pieces of film photography ever produced. It captures perfectly the mood and feel of many similar park/bridge locations in the city. The image is both serene and haunting, in the film noir style that Allen chose for his love letter film, taking the purity of his representation a step further to illustrate that the aliveness of New York can be captured without the need for any external affectation whatsoever.

The quintessential New York film, Annie Hall’s mainstream appeal and pop culture significance cannot be understated. In this production still from the movie, Annie (played by Diane Keaton) and Alvie are getting to know each other after meeting during a friendly doubles tennis match. In one of my favorite scenes from the film, Annie talks about her deep love for her grandmother, Grammy Hall, and the meaningful gifts she received from her as a child. Alvie responds, “My ‘grammy’ never gave gifts. She was too busy getting raped by Cossacks”

Diane Keaton single handedly changed the entire fashion industry with her outfit from this one scene. She has noted in countless interviews that she mostly wore her own clothes for this film, and this gender-bending vest and tie ensemble endures to this day as a decidedly New York fashion legacy.

Godfather II, the only sequel from that franchise that I acknowledge exists, is a study in the Italian immigrant experience in America. It is a prequel in a sequel, depicting the start of the Corleone American family line, and, by proxy the birth of coza nostra as a survival alternative. In image one we see young Vito Corleone, having been spirited away to America as a child after witnessing the murder of his parents, standing in an Italian ghetto and facing an uncertain future for his young family. The young Vito scenes in Godfather II paint a very cinema-centric image of the immigrant experience. However, by waxing romantic on this era in American history, Francis Ford Coppola’s film adaptation of the Mario Puzo novel has in effect romanticized the history of the Italian-American legacy with all of its trappings, setting the archetypal standards for all similar depictions that would follow. In the second image, Michael Corleone, the son Vito had hoped would legitimize the family, waits outside Jack Dempsey’s restaurant to be picked up by rival gangster Sollozzo and Officer McClusky. Having been severely beaten by Officer McCluskey after assassins had shot his father Vito, Michael decides he must be the one to exact the family’s revenge for the murder attempt.

Ford Coppola really encapsulates 1940s and 50s New York in this scene outside Dempsey’s with the neon reflected in the dank rain coated streets on a cold night when the father’s favorite is about to fall to Earth. This full-circle turnabout sets into motion the transformation of Michael from war hero and college graduate, to ruthlessly effective leader of his crime family. This era in New York history is important to the appreciation of the multicultural New York aesthetic in history and in film as the narrative of Vito to Michael in the film follows the evolution of the city itself, culturally, visually and historically.

Where the Godfather II captures the Italian immigrant experience aesthetic of New York, Goodfellas effectively ties the dynamic trajectory of America in the later-half of the 20th century and weaves it into the New York setting. 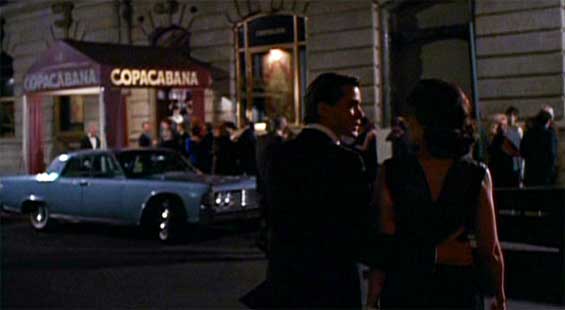 Iconic locations such as the Copacabana frame the New York aesthetic in time, as if to freeze it within a caricature of itself, exaggerating the edges and colors and delivering the entire package with impeccable writing and brilliant casting. Nothing quite says New York in film like Robert DeNiro. Even if the film had nothing to do with New York, DeNiro always says New York. He could play Santa Claus relocated to Phoenix and working as a cake decorator and I would still think New York.

The difference between the Godfather and Goodfellas, or one of the differences, there are many, is this framing in time. Scorsese had said in an interview many years ago, how he used color to really root this film in the time period of the 1960s. He used filters to give the entire film a slightly green cast, which, to me, gives it a snapshot quality. To see Goodfellas, then, is to see New York city in an exquisitely preserved Polaroid picture album. It is that “shared memory”-centric 1960s aesthetic that made Scorcese’s technique so effective. To see this as the overlay, captures New York city beautifully in time. 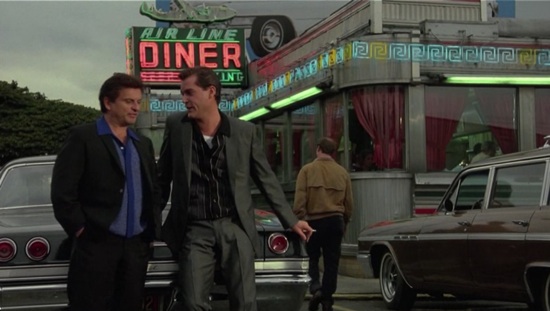 We can really see the beauty of Scorsese’s color palette in the diner image above. The image is stark and beautiful while remaining incidental, which seems key to the style and technique throughout the film. The diner itself, as an iconic location in Queens, is also the setting for the scene below which ties the exterior and interior borough shots together in a fascinating parallax that expresses Henry’s chaotic downfall as the family turns against him in the end.

Do the Right Thing

Spike Lee’s love of his beloved Brooklyn is no secret. The aesthetic of Mookie’s Brooklyn clearly has an autobiographical slant, with the rich tapestry of personalities and colors lovingly weaved within the narrative of conflicting New York cultures. The neighborhood setting immerses the viewer in borough-centrism, the bridge-and-tunnel view of New York just a few miles from the epicenter of the universe but millions of miles away from the promise. The red overtones in Lee’s color palette for this film makes the brick structures come to life to underscore the intensity of the environment, washing every scene in a dusky New York rust red

Like the Edward Norton character in Fight Club, the city in the film is also never named. However, the end scene definitely suggests a pre-9/11 New York city skyline with the World Trade Center in the foreground. The protagonist’s focus on the immasculating effects of modern capitalism would most likely target the center of capitalist culture and New York’s Wall Street district is the obvious aesthetic for this part of the film.

Fight Club, and this scene in particular, leans toward a blue cast, which, along with the fantastic outcome, leaves the viewer with a comic book-like New York aesthetic. While it is not a match for my personal aesthetic, it is, in itself classic as the crowning feature of the dystopian bleakness that frames the manboy-in-the-city tone at the heart of Fight Club.

I chose these films for this project, however there are a number of other films that have fascinating settings and aesthetics. It can be a difficult thing to choose one overriding personal aesthetic, but by focusing that question to setting and location, I feel I’ve given an accurate representation of one facet of my personal film aesthetic that was worth discussing.

Do the Right Thing:
http://thesource.com/wp-content/uploads/2014/06/Do-the-Right-Thing.png